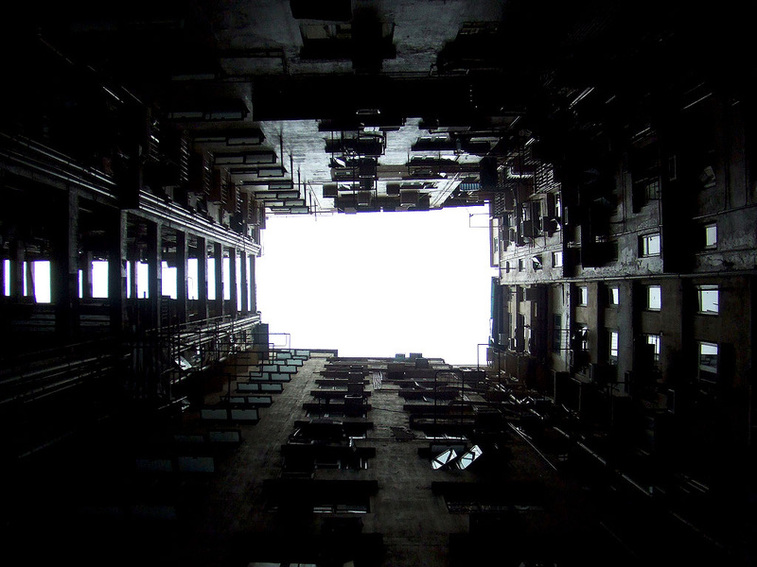 An empty sky captured within the courtyard of a residential building in Hong Kong.
Empty spaces and gaps in Asian cities offer a relief from the densely built up urban environment. Whether it is an empty courtyard that allows one to see a glimpse of the sky; a vacant space between two buildings at street level that becomes a physical and psychological threshold separating the private interior from the exterior, the condition of emptiness is a welcomed phenomenon.

Emptiness is more than just the absence of the tangible and the measurable. The Japanese Torii gate marks the entry into a Shinto Shrine and frames an empty space designating the transition from the secular to a sacred realm. Architect Tadao Ando radical form of emptiness in his architecture, coupled by the reductive formal expressions of his early houses have been lauded as an attempt to recover the relationship between the Japanese house and nature. It is an observation Ando himself agreed.

“…The aim of my design is…to impart rich meaning to spaces through such things as natural elements and the many aspects of daily life. Such things as light and wind only have meaning when they are introduced inside a house in a form cut off from the outside world. The isolated fragments of light and air suggest the entire natural world.” (1)

As Kenneth Frampton echoed in his essay on Ando’s works,

In Ando’s Azuma row house, the emptiness of the courtyard reveals the captured and intensified nature, and reconnects it to the everyday interior lives of the inhabitants. For Ando, the fullness of an architectural experience is restored by nature filling up the emptiness. It is not unlike Kenya Hara’s definition of emptiness, where he situates the condition within the religious, cultural and aesthetic traditions of Japan. Emptiness re-connects human existence with the spiritual grounding of commune and harmony with nature.  Distinguishing the concept of emptiness from simplicity, Kenya Hara gives the example of the design of the Western and Japanese kitchen knives. The Western version, which is ergonomic in design, is simple to use while the Japanese knife, with a universal grip, is empty of any didactic message of use. It allows the Japanese chef the freedom and flexibility to develop unique ways of holding the knife specific to the task. (3)

In his book, Nothingness: Tadao Ando’s Christian Sacred Space, author Jin Baek articulates the spiritual and metaphysical notion of nothingness developed by Japanese philosopher Kitaro Nishida, founder of the Kyoto School of Philosophy in the spatial emptiness of Ando’s architecture. Ando’s nothingness, he argues, is unlike the minimalist trend in architecture in the 1990s, which is first and foremost an aesthetic choice. Baek’s interpretation expands Ando’s work “to a larger horizon of humanity including the ethical and the spiritual”, where the experience of nothingness does not simply means an absence but “a point where language itself becomes aware of its inability to review true reality.” (4)

The ethical dimension of Ando’s architecture comes across fervently when he says, “It is important to discover what is essential to human life, and to consider what ‘abundance’ truly means. An architectural space, stripped of all excess, and composed simply from bare necessities, is ‘true’ and convincing because it is appropriate…” (5)  Ando’s strategy of reduction, simplicity and emptiness is an architectural challenge to our contemporary world of excessive consumption.

Empty sites are also crucial as transition spaces; spaces that allow city dwellers whose fleeting economic values can span from something to nothing, to remain in holding patterns for different durations. These spaces are especially important for residents at the fringe of society, who have little control or claim to the city and are unable to afford the rent for a shop space or a place to sleep. It includes migrant workers whose transient presences in the city are needed in order to keep the consumption machinery moving and growing as well as the homeless, whose economic value has become ZERO. Sociologist Zygmunt Bauman, in his book, Wasted Lives: Modernity and Its Outcasts, introduces the term human waste to describe the excess and no longer economically useful or redundant populations that are the ‘collateral casualties of progress’ (5) . They have ZERO economic value and are not unlike waste produced by the global economy. As free and neutral spaces, empty sites permit public socialization liberated from monetary payment, free of rules that govern a predetermined set of behaviors, social rank and claims of ownership. Besides commercial and social activities, some of the reclaimed spaces also serve as points of spiritual anchoring for urban dwellers. 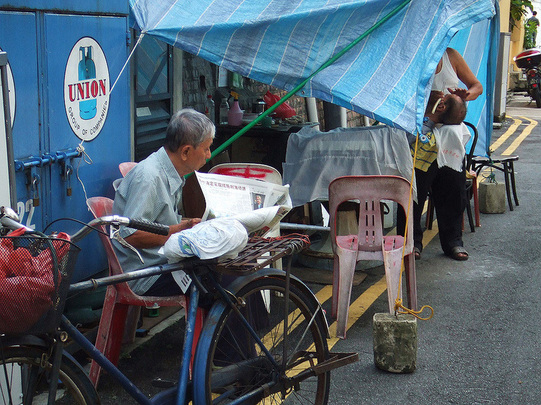 A back alley barber in Singapore re-claims the space to set up a barbershop. 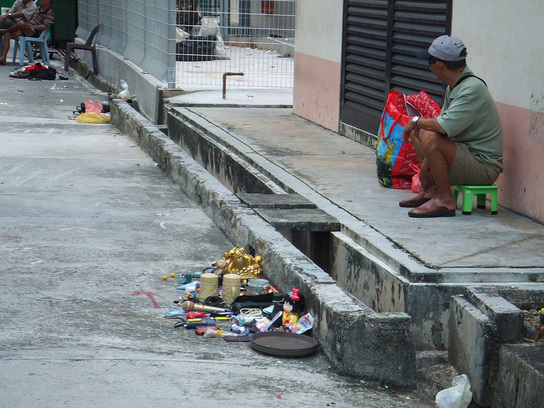 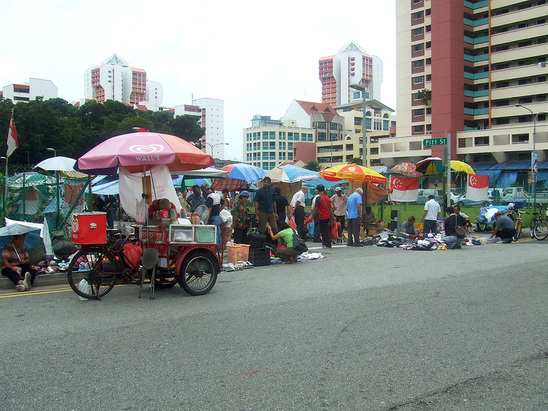 Thieves Market that lined along the empty sites along Sungei Road in Singapore first began in the 1930s as a scattering of small, informal stalls selling used goods. The open- air flea market got its name from its early notorious history as the place to find or buy back stolen goods. Through time, it has evolved into a popular place for locals and migrant workers to hunt for used and cheap goods. The popularity of the place spawned larger gatherings of stall owners, which the authority eventually recognized and created simple rules of operation for the place. There is no fee to be paid for setting up a stall, except that business transactions can only take place between 11am to 7pm, and that no new items are sold. The Thieves Market also serves as a kind of business incubator. A few street peddlers who first started here eventually were able to rent a shop as their businesses grew. During the recent economic crisis, the flea market saw many new comers who seized the free rent opportunity to set up their own business after being retrenched, so much so that it created tension between the longtime street peddlers and newcomers. 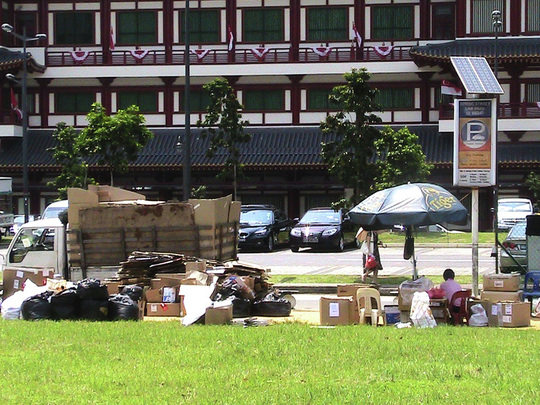 Nestled among the buildings in the financial district of Singapore are groups of used cardboard collectors. They operate individually and in groups to collect cardboard boxes, used papers and other discarded documents from office cleaners, workers and near by residents. These collectors are part of a larger network of informal workers supporting Singapore companies engaged in the recycling business. The collectors commonly occupy small empty plots of land in the city and empty spaces between buildings. Given the transient nature of their activities, their stalls are compact and highly portable. For one stall in Chinatown, it has evolved though time into a distinct locale, expanding its initial economic activity to form social connections beyond its territorial boundary. 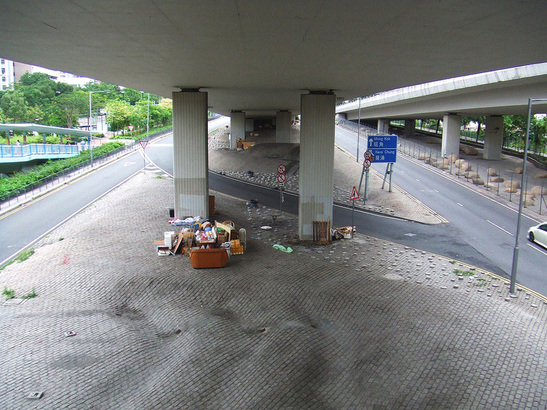 The empty spaces below the flyovers in Hong Kong are popular spaces for the homeless to take shelter. The proximity to a public toilet and shower facility further makes this an ideal location for many who have turned into, as Bauman termed, human wastes that are no longer considered productive and useful. 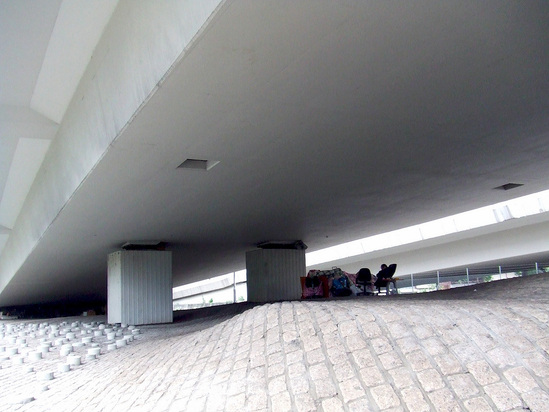 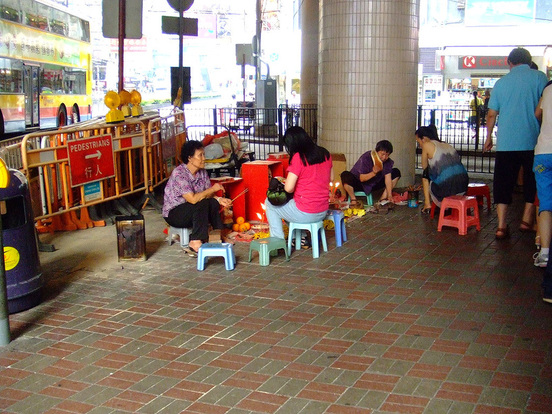 Under the flyover in Causeway Bay, Hong Kong is a group of elderly women who offers the Da Siu Yan service to local residents. Translated literally as ‘Hitting the Little People”, the paid service helps anyone to have his or her bad luck cleansed away. For slightly over five US dollars, the elderly lady will conduct a ritual that includes chanting, the burning and scattering of offerings as well as the hitting of the ‘little people’ with a high heel shoe over a brick. The final act involves the throwing of two half moon wooden blocks or 'jiaobei' to symbolize the success of the ritual. The elderly ladies have become an important part of the social and religious landscapes of the people here, as both young and old urban dwellers come to this place to seek better luck or remove ill ones.
The re-appropriation empty spaces also reveals serious issues with regard to the dependency on cheap and disposable (in the eyes of employers aiming only for profit maximization) migrant workers, their plights and the social problems that arise. The migrant worker’s ZERO visibility among the local indigenous residents, despite their huge presence in cities such as Singapore, Hong Kong and Bangkok, causes them to gravitate to the spatial margins of the city. As the spaces are often overlooked and interstitial in character, they are forms of spatial blind spots that afford the migrant workers a degree of invisibility from the local residents. Given the transient and sometimes illegal nature of their existences, individuals and communities living along the margins are constantly finding ways to appease and avoid any confrontation with the authorities or anyone who may find their presences unacceptable.

The emergence of open-air and make-shift brothels in the empty forest grounds of Singapore that cater to South-east Asian migrant workers expose the hidden social problems within the rapidly expanding and economically driven city-state. An investigative report that first appeared in the Bangkok Post and subsequently taken up by the local press reveals a complex web of deception, bribery and tactics to ensure continuity and concealment of the operations. (7) 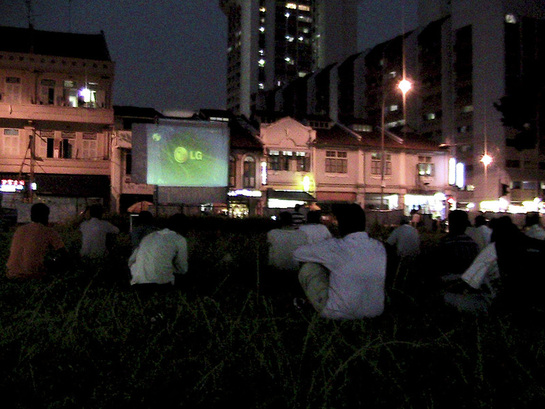 The empty carparks and land in Little India, Singapore serve as a social gathering place for hundreds of South Asian migrant workers in the city-state during the weekends. These empty spaces in the city are the only spaces that are free and big enough to house the large groups of migrant workers. They come from different parts of the city and some are brought here in special chartered buses that will bring them back to the dormitories at designated times. 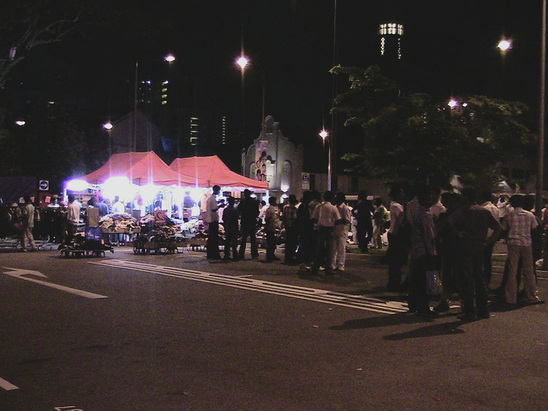 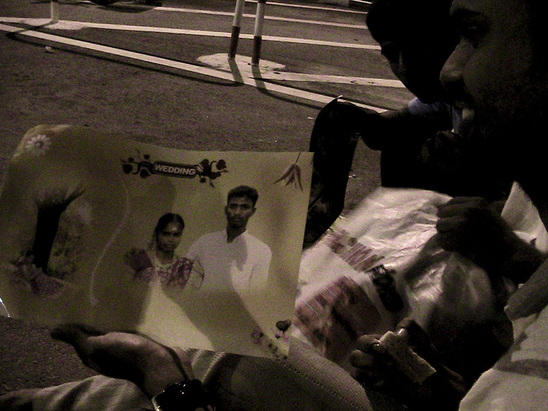 During my nightly drifts around the city, I came across a group of migrant workers from India who had gathered in an empty carpark in Singapore's Little India. Out of curiosity, I started a conversation with them. I found out they had been here for a few years and came to Little India on weekends to meet friends, have a meal and share stories. One showed me pictures of his brother's wedding, which he recently attended. During this brief moment, I was showered with many sweets and food. They told me I had to try all of them because they would give me a taste of India. All this happened in an empty carpark; empty of cars but filled with Indian migrant workers who gathered here. I have often watched them from a distance, either when I drove past or when I was in a taxi. Despite sharing the same space, our lives do not cross. Only now, when I sit and talk to them that I can put at least a name to the sea of faces, to share a story and a meal. When I asked the gentleman who recently attended his brother's wedding what was his name, he answerd: Thomas.
Increasingly, as more spaces in the city are subjected to surveillance, regulation, control and market forces, it will be difficult for such informal activities to occur. Ironically, as a society becomes sophisticated, rules, laws and regulations have also become the norm for social exchange in the city. These examples of tactical, creative and resourceful ways of using empty spaces therefore are at once alternative approaches for a more equitable and sociable city, as well as symptoms of underlying social marginalization, exclusion and by-products of globalization and the market economy.