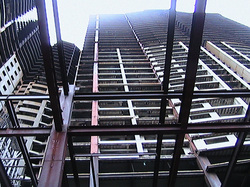 Nestled amidst the chaotic and bustling city of Bangkok are semi-built casualties of the 1997 Asian financial crisis. These 'Ghost Buildings', as they are called in the city are now surrounded by high-rise developments. Walking through the abandoned spaces overgrown with plants and trees, one cannot help but reflect on the collective misplaced ambitions and plans during the economic boom era, not unlike what the world went through prior to the Great Recession. It is estimated that around 135 billion baht is needed for the resurrection of 508 unfinished high-rises in Bangkok.(1) 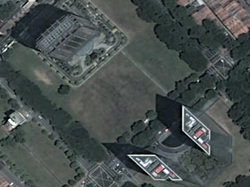 The Ophir Road site next to the Bugis subway station in Singapore has been vacant for several years. Despite the excellent location, it is rumored that the bad Feng-Shui arising from the sharp angles of the Gateway building by I.M. Pei on the opposite side is the main cause of the continuing emptiness.(2) The Urban Redevelopment Authority of Singapore’s participation in the “Marche International des Professionals de L’Immobilier” (MIPIM), an international property event in March 2008 that showcased this empty site further fueled speculations on the influence of Feng Shui among local developers who are reluctant to develop the land.(3) In 2010, the empty site was finally offered to the Malaysian government as part of an agreement to relocate the Malaysian government-owned Tanjong Pagar railway station to the new Woodlands Train Checkpoint. 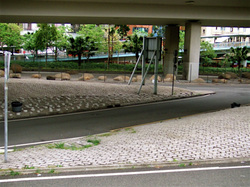 The splintering of the urban landscape by road, rail and highway networks have given rise to islands of undefined and empty spaces in many contemporary cities. In densely populated cities such as Bangkok, Tokyo and Hong Kong, the high demand for spaces to support daily activities resulted in such interstitial spaces being reclaimed by urban dwellers for their individual and collective uses. These empty islands are also favorite places for the homeless to seek temporary shelter. The ambiguity of these forgotten spaces offers a degree of invisibility to the homeless in the urban landscape. 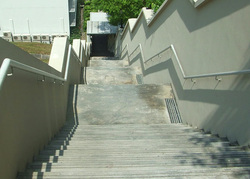 A simple flight of staircase leading from the bottom of the hill up to the top of a residential area in Singapore is a result of the easement law applied to the property. An easement is defined as,

I have used this narrow stretch of land as a route to the top of the hill since a teenager. During that time, the stair was a series of makeshift steps constructed to facilitate public access. When the new private residential development was built recently, the space was designated as a public right of way as a result of the easement law. The developer was not allowed to build in this space, except to continue with the provision of a public access. 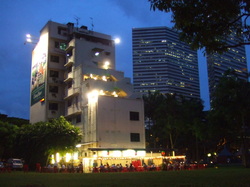 The Singapore government owns and controls all the land in the city-state to ensure the efficient and productive use of limited land for economic and infrastructure developments. It is not uncommon for buildings still in very good state to be demolished to make way for new developments. Recently, a well-loved and cherished small budget hotel, which has a long history in the city was demolished to make way for the building of the new downtown subway line. Over fifty years of presence was emptied within the space of a few months. Below is one of the letters to the press,

“The New 7th Storey Hotel demolition is another painful reminder of similar acts by the authorities.The most recent example is the demolition of the red-brick National Library building in Stamford Road. Another, already fading in our memories, is the beloved former National Theatre, just a few streets away. I hope the Government remembers that the collective historical memory of Singapore belongs to the nation, and its people, and must be treated with respect. Architectural history is an important component in the fabric of the people’s memory, and these threads should not be torn down in the name of progress. Is it any wonder that increasing numbers of young Singaporeans find it hard to sink roots here and choose to move abroad?” (5) 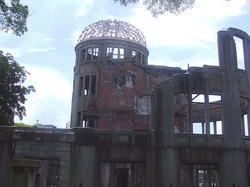 The physical and haunting emptiness of the A-bomb dome in Hiroshima stands as a lasting symbol of the devastation caused by the atomic bomb during the Second World War. Its absence of any practical use is replaced by a symbolic role and as a memorial to those who have perished in this horrific bombing. Emptiness becomes a repository of memories.

Conflict does not necessarily reduce a building or a city to a wasteland. For over fifty years, the absence of human interference in the heavily fortified demilitarized zone between North and South Koreas has supported a rich ecosystem of wildlife and as much as sixty endangered species. Ironically, this no-man’s land, which is embedded with landmines, is now being studied by environmentalist to find ways to protect and preserve the wildlife habitat. (6) 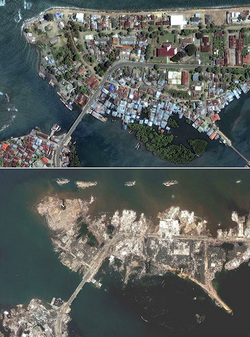 Source:DigitalGlobe Inc. © all rights reserved
The 2004 Boxing Day Tsunami, which was caused by a massive 9.1 magnitude earthquake centered off the western coast of northern Sumatra created widespread death and destruction to the coastal towns of fifteen cities in Asia and as far as Africa. (7) The emptying out of buildings and lives was played repeatedly over international news channels via television and the Internet. 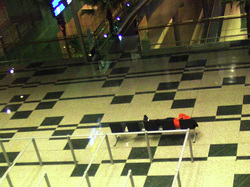 A facet of our modern-day lifestyle is the regulation of our everyday by the clock, which sets the time for work, rest and recreation. The quiet and tranquil empty airport lounge and subway stations in the early hours of the morning, emptied of frenzied passengers and commuters are two contemporary examples of how chronological time alters our perception of spaces in the city. Seasonal transformation of a place such as a park, from summer to winter exposes different atmospheric qualities due to the absence of human occupations, flora and fauna as well as the emptied out of colors by the snow.